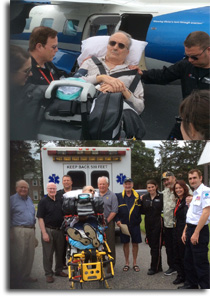 Ted has been a Rotarian for 20 years, he has been a member of Eastern Shore Chapel for 30 years. Circumstances left Ted a thousand miles from his sister and family in Dupage Il. At 78 Ted wanted to be with his family as his health was poor.

His Rotary friends and the church formed a partnership with the family so the expense was acceptable.

Ted’s flight was a huge success and he is home now where his life will be much better. Shelly Engle and Hal Blank, who said a prayer as they loaded Ted were warm loving Christian people and they are doing Gods work.