Grace on Wings is such a blessing! (Mission 237)

Our son, Jackson was born prematurely at just 24 weeks and 1 day gestation—nearly 4 months too soon.

At the time of Jackson’s birth, we were told that his chance of survival was a grim 10%. Since we were traveling from our home in Buffalo, New York to Indianapolis, Indiana to pick up our other children who were visiting the Nana in Kansas for Spring Break, we were out of our area, and told it would be several weeks before we could even think of transporting Jackson closer to home. Jackson was very sick and medically unstable, so Jackson and I were left at the hospital in Indiana while the rest of our family returned home to New York.

After spending 2 months in the NICU at St. Vincent Women’s hospital, Jackson had endured 3 surgeries and countless transfusions and diagnostic tests. He was finally off of the ventilator and ready to move closer to home. Unfortunately, our insurance company failed to see the medical necessity of transporting our baby boy closer to home, allowing our family to be reunited, and for me to return to work.

This is where Grace on Wings stepped in. They are such a blessing! Not only was Grace on Wings generous enough to absorb the cost of transporting Jackson closer to home, but they had awesome equipment and amazing staff. From the second they stepped into the room, a tremendous peace came with them. They took such great care of our little boy and transported him safely to Buffalo. 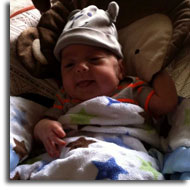 The team that saved Jackson in his original transport to the hospital was the same team that brought him home to Buffalo for us. There is absolutely no doubt in my mind that God is working his wonders directly through their caring, capable hands.

Grace on Wings is an excellent organization allowing God to do his work and spread his love through them.

We are forever grateful.